Destroyed bridge near Tessy sur Vire.  No doubt 30th men passed this way.  Any help pinpointing the location of this bridge and photo would be greatly appreciated.

Description for back of photo.

Red Arrow points to bridge on 1940 map.  Click to enlarge. 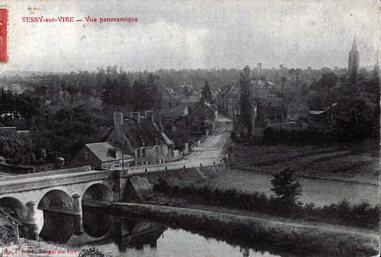 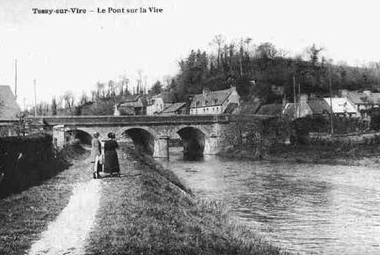 More vintage photos of Good Le Bridge, I believe is name.  Provided by Rene Bonatti.  Many Thanks!!

Great photo of Tessy Sur Vire with bridge in center left of photo and road to Torigni.

Lower Resolution.   Click this link for more information about the Liberation of Maastricht.

High Resolution Photo of the actual bombing of July 25th, 1944 along the St. Lo/Periers road.  As we well know this bombing by American aircraft went terribly wrong and many 30th men were causalities.  I have never seen this photo and what an eerie feeling it evokes!!  God Bless those soldiers out there.

Back of photo description.

An interesting story sent from John Tomasetti whose father, T/5 Edward J. Tomasetti, of the 30th Signal Corp. Wireman, Team No. 4:  Mr. Watson; Thanks, My Dad told me that they got inside some big
outdoor baking oven for safety during the bombing. John Tomasetti

On the road to Domfront....Lonlay l'Abbaye: 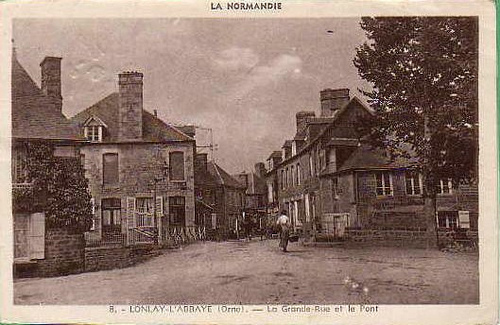 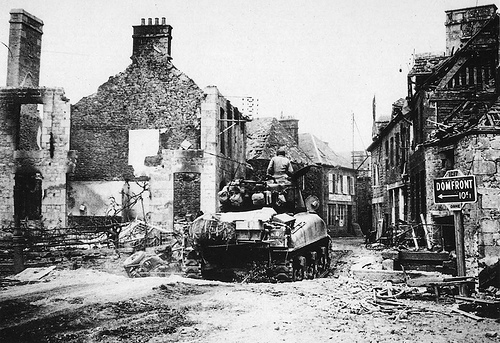 A few more photos for the site.
Page 17 - Domfront.  The road is definitely in Domfront - would do you a current photo but the camera's kaput!  Have sent a pre-war (1900's ????) photo from the same location.
Also a pair of photos from the centre of Lonlay L'abbaye .
Hope these are of interest!
Ian Wood 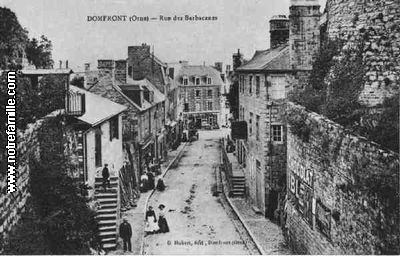 Description on back of photo.

Photo from the 119th history book from an angle a little further away.
This same photo is misidentified in Work Horse of the Western Front as Mortain.   Another source says St. Lo.  I'm going with Domfront until someone tells me different.

Back description of photo.

Low Resolution.  Pontoise was liberated by the 120th Regiment.  From the 120th history book: "The Regiment attacked at 0800, cleared the towns of
Condecourt and Courdinanche, which had previously held up the advance, and went on to seize the towns of Menucourt, Boisemont, Jouy-le-Moutier, Gency, Cergy,
Pontoise, Courselles, Epluches, Vaux, Liesse, and Eragny.  At Condecourt, we took forty prisoners, eighteen of them wounded.  Here, Sgt. "Red" Johnson, Antitank
Company, had two fingers shot off.

High Resolution!! photo of Mortain, Aug. 13th, 1944.  A common view but this is just a little different angle.

If I am correct, the bumper markings on the destroyed vehicle at left is 120th.

Back of photo.  This is a different angle of a very common photo of same area seen in many books.  This photo is
found in the 117th history book:

I'm wondering if someone can pinpoint this location in Mortain?

Dear Warren
I have been looking at the pictures of Mortain and the picture that is seen most frequently has an intact building in left foreground. This is the tourist information office now and the wall in front of it, running diagonally to the sidewalk carries a memorial to the 30th Div. Picture has been taken looking south. To pinpoint this photo on a map, the church, although damaged and not destroyed, is immediately in front of the tourist information office, but set back off the road, hence not visible in the picture.

The photo you want pinpointing looks like it could have been taken facing north and from the very far background of above photo. Most of Mortain is on a hill following its contours north to south, bearing predominantly to the right as one travels north. This road is flat and bears around to the right. This could only be in one of two places, the Grand Rue (main High Street), or if this picture was taken at a Y shaped road junction, again looking north, it could be at the junction of Rue du Rocher and Rue du 30th Division Americain. With the amount of rubble on the ground it could be obscuring the layout of the road. What makes me feel that it could possibly be there is that again it is the second place where the road is flat, but where the infantry man is standing, if you look to the left of the photo there are more buildings which appear to be lower down. Rue du Rocher runs more to the left at this junction and down hill. If it is the latter that means the photographer would have been standing more or less opposite to where my house is now, to his left!!

I hope this is of some help. 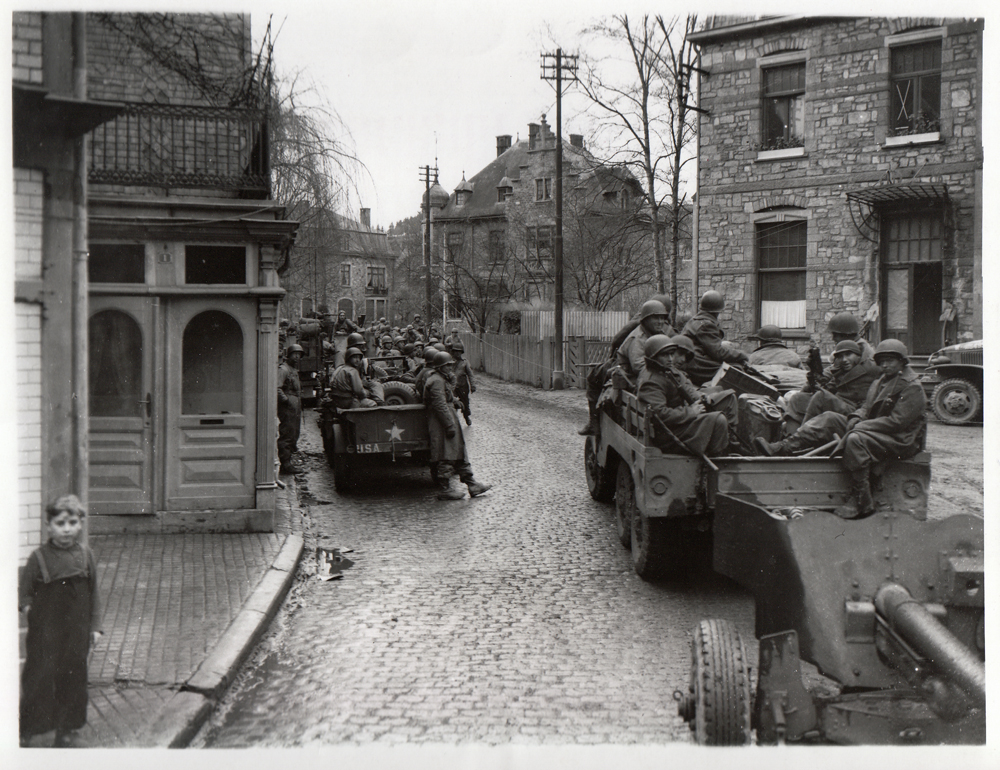 A description in the book Battle of the Bulge Through the Lens, by Philip Vorwald states: "Mounted up in jeeps and ready to move out, elements of the 30th Infantry Division assemble in the heart of Malmedy.  This is the same narrow street corner in Malmedy at the intersection of the Rue de al Gare, with the Place du Commerce, looking east."  In the Battle of the Bulge: Then and Now by Jean Paul Pallud the same photo description states: "This is the route towards the location of the incident for which the name of Malmedy will forever by linked.  This convoy from the 30th Division heads east on the rue de la Gare towards the N32."  My best guess is these are men of the 120th Inf. Reg.  The actual photo description states the date as Jan. 2nd, 1945.  The smaller photo below is a thumbnail that enlarges to a high resolution scan.  I must admit it is beautiful.  The Red arrow on the period map locates the position of the convoy.

After some research (I am making an educated guess) the action referenced below may identify photo above as members of the 120th, Co. I.  I have included a map with Red Arrow pointing to Co. I's objective. 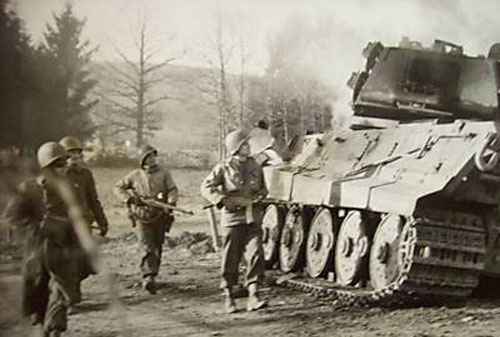 Letter written by 2nd Lt. Ray Holmquist after his capture in the early morning of Aug. 7th, 1944 at Mortain.  Ray Holmquist was in the 120th's 2nd Battalion Headquarters.  Ray's twin brother Roy was with the 120th Regimental Headquarters and was wounded on March 25th, crossing the Rhine River. 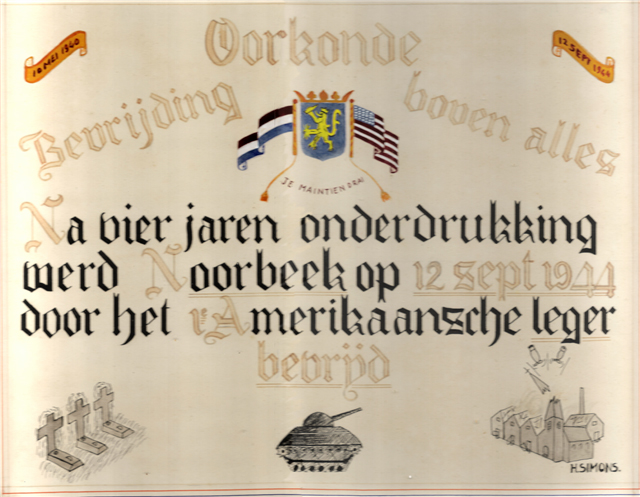 This paper is a "home-made" certificate created by a resident of Noorbeek after the town was liberated by the 119th IR on April 12th, 1944.  It reads: "After four years of occupation, Noorbeek was liberated on Sept. 12th, 1944 by the First American Army."  The people have kept this paper safe for almost 65 years.  Provided by JP Wyers..THANKS!!! 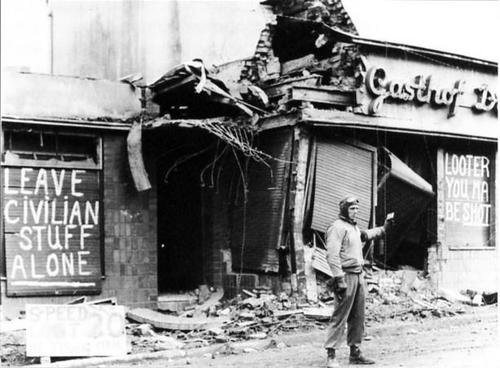 Palenberg, Germany...not sure of time or soldier's unit but this IS Palenberg after capture.

This  is the former corner  Frankenstraße, now Aachener Straße,  in Palenberg  with the restaurant Dreschers.   The photos on Photo Page 16 and 17 are showing exactly this site.